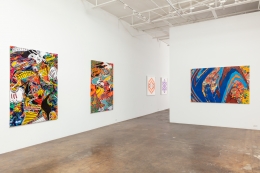 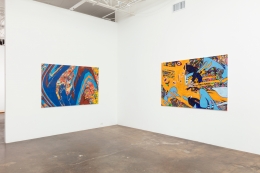 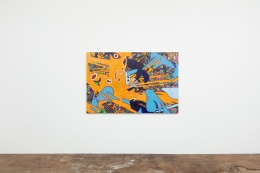 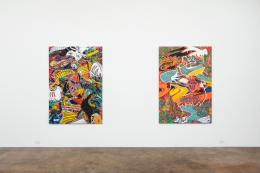 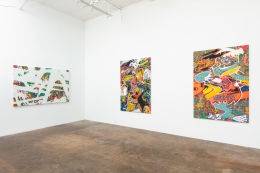 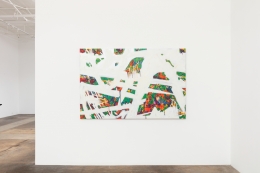 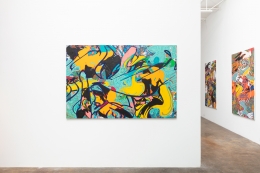 "Forget Goofy! I want to play with Dino and The Flintstones!"-Pluto, 2020

Fred Flintstone and Daffy Duck had dinner with Picasso, 2020

Mickey musketeer with a Pipe, 2020

"Fred Flintstone" - After Picasso and Lichtenstein, 2020

Cris Worley Fine Arts is pleased to present our fifth solo exhibition of works by Dallas-based artist, Ruben Nieto. Cartouche, opens Saturday, November 21st, and will be on view through January 2nd, 2021. An Open House will be held at the gallery Saturday, November 21st, from 12 – 4pm with a limit of 10 visitors in the gallery at a time. Appointments for the Open House are not required but are strongly encouraged.

This exhibition’s title, Cartouche, refers to the hieroglyphic, ornamental shields of Ancient Egypt which were known to honor Pharaohs, much like a royal coat of arms. This tradition of revering and immortalizing royal figures lends itself well to Nieto’s practice of honoring iconic cartoon characters from his own childhood.

The artist simultaneously honors his Mexican heritage by referencing the Ancient Mayan writing system, the glyphic cartouche, which utilized over 800 symbols to form words, sounds and concepts. Nieto continues to build upon the development of his own visual language by paying homage to iconic characters and artists in a distinctive, undulatory manner.

Says Nieto, “The influence of Pop Art and Abstract Expressionism are inherent in the facture of my work.” In the dynamic painting, Mickey Musketeer with Pipe, a frenetic abstracted figure is anchored by imagery that references iconic figures from the likes of both Walt Disney and Pablo Picasso. In more ambiguous works such as Snow White, Nieto strategically selects colors that unmistakenly correlate to the work’s highly abstracted namesake.