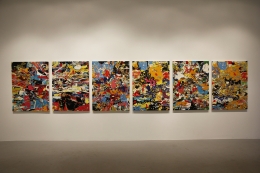 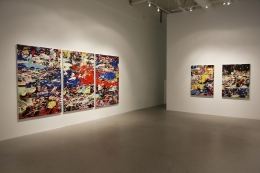 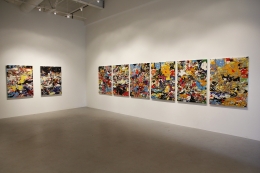 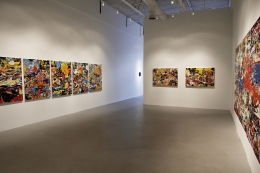 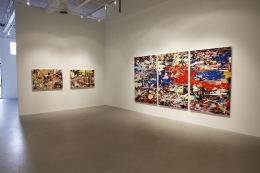 Cris Worley Fine Arts is excited to announce Dallas-based artist Ruben Nieto’s latest solo exhibition, ‘Ruben Nieto – Shadow Paintings’.  The exhibition will open Saturday, May 18th from 6pm – 8pm with an artist’s reception and will continue through June 22nd, 2013. Comic books, Abstract Expressionism, the Pictures Generation, Pop Art and technology all converge in the work of Ruben Nieto. Since being exposed to American comics at an early age in Veracruz, Mexico, Nieto has been fascinated with popular imagery and culture. While earning his BFA from the Universidad de Guanajuato and his MFA in Arts and Technology from The University of Texas Dallas, Nieto was exposed to the masters of Modern art who have shaped both his aesthetic and process such as Jackson Pollock’s controlled drip technique, Robert Motherwell’s graphic cubist collage, and Willem de Kooning’s bold sense of color, among others.

Nieto uses Photoshop to digitally deconstruct comic book pages down to basic shapes and forms and uses those shapes to compose his canvases. Once completed, he sends the digital images overseas to be transformed into oil paintings by assistants, carrying on a longstanding tradition in the history of art of utilizing a workshop. He then, personally, adds the finishing touches to his canvases in his studio. Ruben Nieto’s Shadow series expands upon his theme of deconstruction and reconfiguring, creating an intriguing new narrative from seemingly unrelated imagery. He no longer integrates comic book characters or figurative forms into his visual lexicon, but the explosive use of color, graphic use of black, and animated motion all refer back to Nieto’s creative catalyst, the comic book.

Ruben Nieto has exhibited extensively throughout Texas as well as Switzerland, Germany, Spain, France, Canada, Mexico and the United States. He lives and works in Dallas, Texas and is currently a PhD candidate in Arts and Technology from the University of Texas at Dallas. Dr. Richard Brettell, professor of Art History at UTD, Impressionism scholar, and former McDermott Director of the Dallas Museum of Art, will be writing a forward to an accompanying brochure on the exhibition.