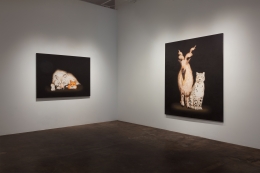 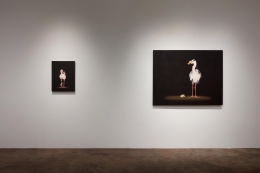 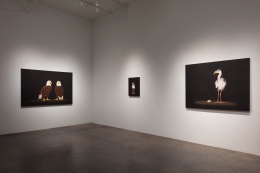 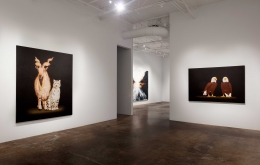 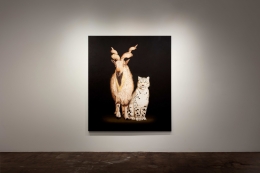 Cris Worley is proud to present Truce, by Isabelle du Toit. This will be du Toit’s seventh showing with Cris Worley. There will be an opening reception with the artist on Saturday, November 18, from 5 to 8 pm. Truce will include new wildlife paintings exploring the peaceful coexistence of predator-prey relationships on canvas. The exhibition will be on view through December 30.

Isabelle du Toit’s finely detailed oil paintings of birds, insects and mammals, found on a stark deep background enhances the isolation and the fragility of these creatures. The artist starts each painting on a highly smooth and ground canvas, as to masterfully capture each stroke. Then, each animal is studied in the same academic manner as a biologist or ecologist. With each tuft of hair, vein, and patch of skin, all are meticulously captured in oil paint. The ever-present spotlight on her subjects both elevates their status, yet simultaneously alludes to an impending sense of encroachment. Within her work, Isabelle revels the overwhelming importance of animal conservation, and her desire to inform viewers about the vulnerability that many of these wild animals face.

In Truce, du Toit, creates a quiet juxtaposition between predator and prey, in various positions of embrace and tolerance. Such odd-bedfellows include the Ibis and two snails; a gray wolf and fox; a snow leopard and a mountain goat. According to the artist, this series looks at the idea of truce from three perspectives: war, relationships, and animal conservation; it is “an armistice to open a door for understanding, tolerance and reconciliation.” In today’s climate of intense emotional and ideological differences, du Toit shows us the harmony within the animal kingdom, as role models for us all.