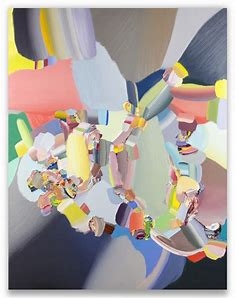 Kristy Gordon is a figurative painter and an adjunct professor at the New York Academy of Art. She received a BFA from the Ontario College of Art and Design in 2011 and an MFA from The New York Academy of Art in 2013. She has exhibited her work in solo and group exhibitions at venues including the European Museum of Modern Art in Barcelona, Spain; the National Academy Museum, NYC; and Flowers Gallery, NYC. As a three-time recipient of the Elizabeth Greenshields Foundation Grant, her work has won numerous awards and honors. She has taught at numerous schools and academies including the National Academy in NYC, and The Academy of Realist Art in Ottawa and Boston. Her paintings hang in more than 600 collections worldwide including the Government of Ontario Art Collection, The Clearing House (New York City) and Touchstones Nelson Museum of Art and History. Gordon is represented by Grenning Gallery in Sag Harbor, New York and Cube Gallery in Ottawa, Canada. See more of her work at kristygordon.com and on her Instagram page, @kristygordonart.

Trey Egan is an abstract oil painter and an adjunct professor of painting and drawing at the University of Texas at Dallas. He received a Master of Fine Art in 2013 at the University of North Texas College of Visual Art and Design. He has exhibited seven solo successful solo shows, has been exhibited multiple times at the Dallas Art Fair, and was recently part of Art Aspen 2018. He also showed several paintings at Pulse art fair in South Beach, part of Miami Art Week 2018 and 2019. In 2020 Egan showed at The LA Art Fair, and the Colorado Governor’s Mansion. Egan’s work has been purchased internationally, by art collectors, and for corporate art collections across the nation. His artwork is represented by Cris Worley Fine Arts in Dallas, TX, and K Contemporary in Denver, CO. See more of his work at treyegan.com and on his Instagram page, @treyeganart.

In this conversation between artists, Kristy and Egan discuss what exactly we should aim to learn in art school, all the things they learned not only from their own art educations but also from teaching art, whether or not they’d stop teaching if their art made them a million dollars a year (spoiler alert: they’d keep on teaching), and so much more.

Trey Egan: A major job of a beginning painting instructor is to break bad habits. I like to think of the word familiar versus unfamiliar. If you’re showing us something familiar, human curiosity is not going to be nearly as high as it is if you go for something that is unfamiliar. When my students show me concept thumbnail sketches for their paintings, I will ask, “Is this familiar or unfamiliar?” I’m a big believer in: To get a good idea, you have to come up with lots of ideas.

Kristy Gordon: I had my thesis advisor at the New York Academy of Art do that with one of my ideas, and I’m so glad that he saved me from doing a whole body of work on something that was really familiar and already done.

Kristy Gordon: I had a breakthrough with color that’s related to my teaching. All of my students were asking me, “How do you mix the shadow color?” I had to come up with something concrete to tell them. It was because of my students that I have a new mixture on my palette, which I call the “base shadow color mixture.”

Trey Egan: Teaching has informed my art practice in more of a human health way. I wonder this: If I wasn’t teaching, how often would I really get out of my studio and talk to people in real life? Getting out and going to school—that’s one of the healthiest things for me. I also return to my studio seeing things in a different perspective and feeling more mentally refreshed.