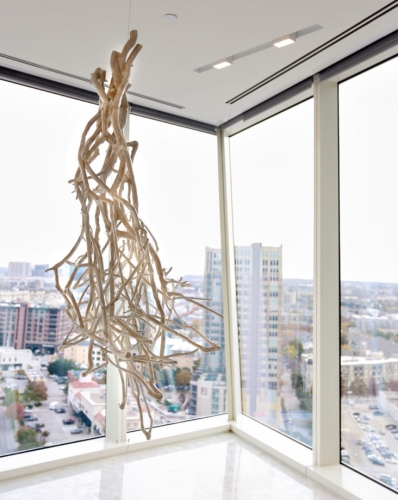 Getting off the elevator on the ninth floor of Legacy Tower in Plano feels like stepping into a portal. Your eyes acclimate in a flash to the bright LEDs that shine up from the floor, out from the walls, down from the ceiling. The brand name “Hilti,” embedded in block lettering in the ground, is lit up under your feet. It feels like a corporate reimagining of being in the beyond from “2001: A Space Odyssey,” the scene in which a red-suited astronaut wanders about a Victorian bedroom that has been illuminated by a floor of stark-white LED lights.

The tool manufacturer Hilti Group (based in Liechtenstein, a 14-hour flight across the Atlantic Ocean) moved its North American headquarters from Tulsa to Plano in 2015, in part to attract a millennial workforce. In doing so, it hired the global design firm Gensler to completely reimagine its space. All three floors prominently feature the company’s materials, more than 26,000 pieces of it: graphite-colored steel desks, light fixtures morphed from cylindrical firestop speed sleeves, 27.5-inch rods made of drill bits welded onto the stairs, 444 14-inch circular red diamond blades that jut out of the company’s logo on an upstairs wall (off the wall, they’re used to cut concrete). It’s a mix of open space and private alcoves. The offices for directors no longer hog the sun and sky on the exterior of the floorplan near the windows; those are on the inside now, allowing the natural light to flood in from the floor-to-ceiling glass.

The colors on two of the three floors are a slick mix of neutral greys and browns and blacks with accents of Hilti’s trademark red. But that ninth floor is different. This is where the software and development segment works. Those lights, that elevator lobby, the overall strategy of separating it from the others—these were all methods to convey a different style for the people who work on that floor, signaling that you’re entering a more creative, free-thinking space, where the employees are welcome to show up for work at 4 p.m. and call it a day at midnight. Here, you’ll find more vibrant colors—yellows and blues and greens—as well as a workplace environment that can be shaped depending on the project. Conference rooms made of modular glass walls can be resized as software is finished and teams are assigned new projects.

“We wanted this open collaborative environment, we wanted a fun place to work,” says Cary Evert, the company’s North American CEO. “It’s very important in our culture that you can feel that it’s not a work environment, it’s an informal environment. And we use our own materials: wood, steel.”

Today, interior designers approach office projects almost like functional art, unique to each client. Architects consider design trends as you do the stars in the sky—they’re reference points, something to analyze and consider. But they’re probably dead by the time they’re seeing them. The interior designer must be a mirror. If not, the company risks this, as described by Gustavo Hinojosa, the director of commercial interiors for Dallas design firm HKS: “You’re in a suit that doesn’t fit.”

Consider the open floorplan. It’s been more than two decades since billionaire Michael Bloomberg sat among his employees at Bloomberg LP (and, later, at the New York City mayor’s office), and the idea of the “open office” has incurred the same sort of rise and fall as any other trend common enough to make it to Forbes and Fast Company. Google may have popularized the concept in the late part of the last decade, but it seems companies are walking it back, adding carve-outs like private huddle rooms and “hotel” stations, which are communal desks for employees who work remotely. Taken together, it appears that companies have added an asterisk to the idea of the open floorplan.

“If you go back and look at a plan that was done in 2010 or 2011, it was all about the fact that it was people; there were no huddle rooms, no collaboration spaces, and no places to break out,” says Paul Manno, a design architect in Gensler’s Dallas office. “And so I think we’ve learned today, five or six years later, that you have to have those space types. If you’re going to make an open plan successful, if you don’t have those other components, you’re missing 50 percent of what you really need to make it right.”

There are plenty of opportunities in North Texas for interior design firms to make it right. According to a report assembled last year by the Dallas Regional Chamber, North Texas welcomed more than 90 corporate and manufacturing relocations between 2010 and 2015, from companies as large as Liberty Mutual (4,000 jobs) and as small as the biotech firm AREVA Med (10 jobs). Meanwhile, companies already here are relocating: 7-Eleven, Raytheon, American Airlines, and State Farm have all expanded within the region, and they all have different needs. Government defense contractor Raytheon, which had its space designed by HKS, moved into a new, nearly 500,000-square-foot office in a Richardson mixed-use development, right in the middle of the amenities young employees desire—apartments, shopping, restaurants, gyms, coffee shops. It’s a reflection of the population surge back into America’s urban centers, which readily offer those types of services to the people who live there.

“I think we’re really lucky in this part of the country,” Manno says. “When things happen around us economically, we always somehow do OK. We feel the impact, but not the impact like you do on the East and West coasts … We still have a lot of land to build on, and I think the idea of having a campus that’s more in a suburban market that allows you to have some soft spaces around it—trees, landscaping, some softer edges—I think we can still offer that, and I think a lot of companies are still looking for that.”

In the 1980s and early 1990s, real estate brokerage and design were handled in-house at many large companies, remembers David Meyer, an associate principal and senior vice president for workplace strategy at HKS. But as the economy splintered, these same companies began eliminating divisions that didn’t support their core business. They contracted those services as-needed. And, in response, the design firms became more analytical, more complex, more nuanced. Technology has helped expedite the planning and design, allowing architects to create the workspace digitally before a wall ever goes up.

As a result, architects will tell you readily that what’s popular won’t always work, and what looks nice from a distance may not fit. Innovation comes after thoughtful analysis, a deep-dive into the company’s operations and aspirations, ideally even before a site is selected. Whatever the reason for the new office, the workspace must match the company. Has it just merged? Is it looking to downsize? Expand?

“Our goal is to get in even earlier than the brokers get in, so we can help work through those strategies early, so when the brokers do get involved they’re not necessarily running the show,” says David Lubin, an associate principal and the regional director of corporate interiors at HKS. “We have informed the client enough to know that they need to do some upfront work, and it may mean that your schedule is going to get pushed back.”

Jo Staffelbach-Heinz, the president of Staffelbach Inc. in Uptown, likes to spend at least a week immersed in the client’s business, observing everything from the pace to the minutiae of waiting for an elevator. She digs into conference room availability and analyzes the amount of time employees spend out of office. Angela Ramer, a “design anthropologist” at HKS, performs site audits to discover what she calls “the lived experience of that space.” She speaks of analyzing badge data to figure out how long every worker spends in the office, because that can help inform both the permanence of assigned spaces and the amount of square footage each employee gets.

After all, the workplace is a tool for retention and recruitment. Evert, the Hilti CEO, says 170 Hilti employees moved from Tulsa to the new Plano office. The retention rate was 96 percent after 12 months. Of the 139 hired since the move, none have left. “Eighty percent of them are millennials,” Evert says. “The office is part of the equation in attracting them to the company, and secondarily, to having them stay with the company.”

Which eases nicely into a conversation about amenities. Following the leads of the nimble tech giants in Silicon Valley, Staffelbach-Heinz says many clients thought attracting millennials meant adding slides and pool tables and nap rooms. What they found instead, she said, is that kitsch fades. Fast. “People came into the office to play and went home to work,” she says. “If you talk to leadership, very few companies are interested in giving a complete adult playground to everybody.”

Functional amenities, designers say, are becoming the demand: Craft coffee, dry-cleaning services, gym memberships, commissioned art. At midsized law firm Gardere’s new digs at the McKinney and Olive building, the views of the Uptown and downtown skyline are complemented by works of art commissioned by Dallas gallery owner Cris Worley. It is, in many ways, the antithesis of traditional law firms. There are private offices on each of the four floors, separated by practice groups. You wouldn’t know which are the partners—their offices are larger, but they’re not in the corner. Those don’t exist.

The rest of the layout is transparent. Dozens of conference rooms, most enough for no more than six to eight people, are encased in glass, the majority within eyeshot of the cranes and spec building happening all around them. It creates an air of activity, complemented by the gallery-quality art. It’s all linked by a wide, spiraling staircase, made of white oak and steel. And like most other modern workplaces, cords aren’t always necessary. Laptops travel freely from room to room and connect to Bluetooth conferencing services, allowing employees in the Dallas office to connect with their counterparts in Mexico City.

There must be adequate room, too, for information technology systems. According to a survey of more than 1,000 IT executives by global telecom firm Tata Communications, 69 percent said cloud technology increased productivity. Sixty-five percent gave employees better access to data, and 63 percent said it cut costs.

“Every company is becoming a technology company, so you have to think that way as you build new space or as you configure new space,” says Lubin of HKS. “It’s that backbone stuff, and it costs money. It’s not cheap.” Adds the firm’s Hinojosa: “It’s oftentimes half the budget.”

All this is done to provide ease of comfort for the worker. From technology to layout to amenities, the workplace should make their actions more efficient. Staffers who work outside the office can continue to do so and have a desk for when they’re needed in-house. The collaborative open concept remains, but there are hideaways for private, head-down work. And, to cut down on hearing your neighbor, white noise is pumped in to drown out impertinent conversation. The coffee is fancier, the art is unique to the client, and the small touches that highlight the company itself are found in the architecture—subtle enhancements that highlight the brand without bludgeoning you with its name. Ideally, this creates a level of comfort that becomes an extension of the employee. Where you go to work starts to feel, almost subconsciously, like just another place in your day.

“Whether it’s a law firm or any company, your space can be empowering,” says Holland O’Neil, Gardere’s board chair. “Don’t underestimate the power of a space and the aesthetics and what it can do to your workforce. I’m living a dramatic change.”