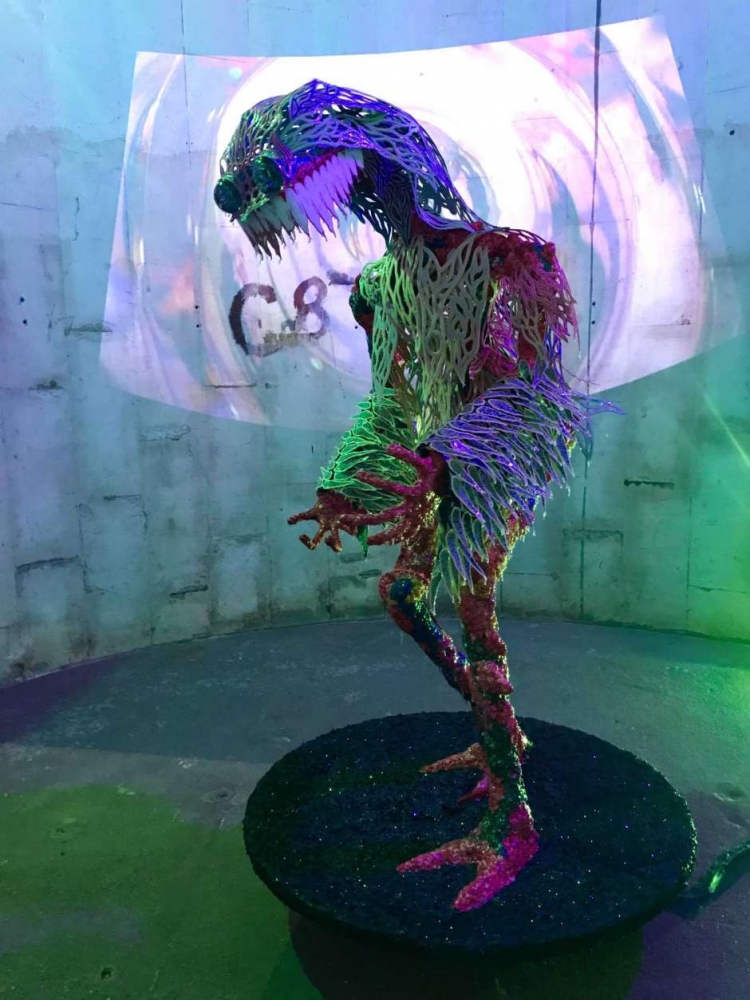 The exuberant business on the right side of SITE Gallery in the Silos at Sawyer Yards takes the title of this year’s big Sculpture Month Houston show, “Outta Space,” to heart. Some of the artists’ installations there look like Van Halen’s heavy-metal song of that name sounds — raucous and pounding — subbing alternative worlds of intense color for noise.

Also attuned to Van Halen’s lyrics, curators Volker Eisele and Antarctica Black have filled the left side of the silos with installations that speak to environmental degradation, overpopulation and social problems — the reason the song imagines blasting away in a rocket in search of a new world.

All of it makes for a provocative and engaging experience, as the sculpture festival activates the reclaimed industrial site west of downtown for its fourth year running. A number of accomplished Houston artists are participating, but the unique conditions of the silos and Sculpture Month’s track record also are attracting a growing number of internationally known talents from outside the city. Bio art pioneer Suzanne Anker, conceptual artist Mark Dion, sound artist Steve Parker, video-installation master Dave Greber and inflatable maker Nicole Anona Banowetz are in the mix this year.
Several of the installations are more about hearing than seeing. Parker fills three silos with sound-producing sculptures made from repurposed musical instruments: Recorded songs of distress emit from the horns of “Sirens,” while visitors can pluck strings on a kind of musical motherboard with “ASMR Étude 2” and listen to audio samples from around the galaxy with “Golden Record.” You might think you’ve landed in a bleak interrogation room within the silos where Lina Dib has installed her multichannel piece,“There Is No Going Back.” But listen: The shape of the silos contributes to the aural bridge connecting the plights of human and animal survival, mixing the calls of endangered birds and NASA space recordings.

Installations by Margaux Crump, Felipe Lopez and Megan Gafford seem visually minimal because they place small objects in the cavernous spaces; although the objects themselves are anything but, alluding to Earth’s elements. Crump’s elegant silo feels like a temple to underappreciated geology, including a table of pastel-hued rocks with opaque, erotic-looking crystals; a shelf sculpture of small rocks that liven up in ultraviolet light; and a museumlike display behind glass of a large “rock” with a cluster of emerging crystals.

Lopez explores water and light, building tiny worlds of floating organisms within light-bulb-shaped resin sculptures. The biggest nearly covers a pedestal; smaller ones hang from a net in another silo. Gafford considers the effects of radiation with a series of paperweightlike sculptures with flowers and Geiger counters of her own making that beep.

Cindee Klement ponders the plight of pollinators with a ghostly, monochromatic hanging-wire sculpture that throws ghostly shadows on the wall.
But trippy, more colorful excess rules.

Patrick Turk’s “Shapeshifter” is the jaw-dropper. He has sculpted a humanoid-monster figure or “reconnaissance unit” from a parallel dimension, with a fantastical cut-paper skin of feathered layers — Turk’s specialty. The “unit” has video cameras for eyeballs and stands on a turntable in changing light, projecting real-time “data” the cameras gather (in other words, you) onto a silo wall.

Jonathan Read’s silo, glowing in black light, springs from his sci-fi scenario about an alien species of human-flesh-eating creatures, the Meanyur-Mono-Gor. Viewers peer in, as if observing exotic creatures in an aquarium, to see an unruly specimen and its offspring settled into a forest of mutating cacti with eyeballs.

Greber’s “Your Greenest Stay” emulates a tree with a trippy painted trunk, layering a cascade of human figures. The “canopy” is made of four rounded video screens, the largest of which is shaped like a bean, or maybe a seed. The video leads viewers on an unsettling trip to a “posthuman” world driven by artificial intelligence.

On the environmental side of the show, Margaret Smithers-Crump’s “A Question of Balance” also looks beautifully other-worldly. Her silo holds three monumental, circular sculptures made with recycled plexiglass and polycarbonate. Two are built of minute, incredibly detailed parts, as layered as Turk’s paper collage. They have a compelling sense of motion; you might imagine them as swirling water or ice. Their reflections appear in the third piece, which rests on the floor like a vat of oil or some other abyss sprinkled with ice crystals.

Stepping under Abhidnya Ghuge’s “Beauty and the Beast,” made of hand-printed paper plates, might make you feel as if you’re about to be swallowed by a particularly vivid octopus. Anker’s “Astroculture” glows like the lab of a mad botanist. Inspired by NASA experiments to test the growth of plants in extreme conditions, it’s a display grid of small, potted specimens that do not seem to be flourishing under fuchsia light.

Eisele and Black have also returned to the 1940 Air Terminal Museum at Hobby Airport with a companion show, “Pitch and Roll,” tucking sculpture by nine artists among the vintage planes in the museum’s historic hangar. The five flying machines — including a Lockheed Lodestar and a Cessna Bobcat with bamboo wings — are as dazzling as the art, goosing the narrative about abandoning the Earth for whatever lies in the big blue beyond.